Last Polling Out of SC…

Leave a comment Posted by Robert Turner on February 28, 2020

Looks like Biden’s firewall will stand. What’s impressive, is Buttigieg sudden rise in the state. Klobuchar and Warren are in trouble — especially Warren. In a recent poll, she trails Sanders IN HER HOME STATE OF MASSACHUSSETS! More on that this weekend.

Bloomberg creeping up in Florida poll

Leave a comment Posted by Robert Turner on February 14, 2020 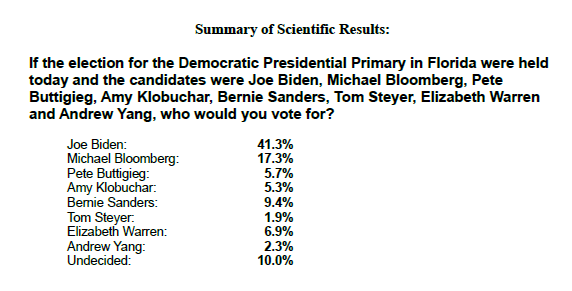 What a difference a month makes! The same pollster conducted a new poll over the last two days of 3, 047 likely Democratic voters. With an MOE of 1.8%

Florida votes two weeks after Super Tuesday (March 2nd), so there is still time for anything to happen. But one must admit that the trajectory for both are in opposite directions. I’m not writing off Uncle Joe…yet. Blacks in South Carolina are his firewall. And the Culinary Union in Vegas not endorsing anyone doesn’t help his campaign either. Let’s see how Klobuchar and Mayor Pete do in Nevada, which caucuses (minus the app!) next Saturday.

After NH, now what?!

Leave a comment Posted by Robert Turner on February 12, 2020

So, now what?! Does Biden get his groove back in time for South Carolina? There are no recent meaningful polling from either Nevada or SC, so any talk is just hot air. Do blacks stay with Biden in SC? Does labor push Bernie over the threshold in NV where he lost by 5 points to Hillary? Do Amy and/or Pete get any traction with minorities? And what’s all this crowing about Bernie getting 40% of the Hispanic vote last night? NH has a Hispanic population of 4%. So that’s what? 1,200 votes out of 290,000 that were cast last night?

If Biden under performs in SC, that will definitely create a lane for Bloomberg on Super Tuesday. But only if Mayor Mike can quickly make himself the principal alternative to Sanders. Keep that spending up.

RIP to the campaigns of Andrew Yang and Deval Patrick. Was Patrick really running? And why?! Oh, and I’m calling it now. Warren is done! Thankfully.

From the Left: Obama, A Pedestrian and Overconfident Speech

Leave a comment Posted by Robert Turner on September 7, 2012

I was shocked to read this online.

Let’s be blunt. Barack Obama gave a dull and pedestrian speech tonight, with nary an interesting thematic device, policy detail, or even one turn of phrase. The crowd sure didn’t see it my way. The delegates were near delirium; to what extent they were merely still feeding off the amassed energy of the previous two nights I can’t say. more…

Leave a comment Posted by Robert Turner on August 8, 2012

“The Obama National Campaign in Chicago has put DC Democrats on notice: The campaign won’t be making the President, First Lady or any of their surrogates available for fund raisers here in DC.

Said one prominent Democrat,”They’re trying to avoid the photo opp” that might be used against the President.”

This morning, presumptive Republican Presidential nominee Mitt Romney spoke before the National Association for the Advancement of Colored People (NAACP).  I didn’t get a chance to watch the video, but I have read most of the text of the speech.  I encourage you to do the same before listening to the chattering class (on either side) later tonight on cable news.  Read it for yourself.  Big props to Kathleen McKinley of the Houston Chronicle for posting the entire transcript.  Wasn’t able to find it anywhere else.

Thank you, Bishop Graves, for your generous introduction. Thanks also to President Ben Jealous and Chairman Roslyn Brock for the opportunity to be here this morning, and for your hospitality. It is an honor to address you.

I appreciate the chance to speak first – even before Vice President Biden gets his turn tomorrow. I just hope the Obama campaign won’t think you’re playing favorites.

You all know something of my background, and maybe you’ve wondered how any Republican ever becomes governor of Massachusetts in the first place. Well, in a state with 11 percent Republican registration, you don’t get there by just talking to Republicans. We have to make our case to every voter. We don’t count anybody out, and we sure don’t make a habit of presuming anyone’s support. Support is asked for and earned – and that’s why I’m here today. MORE…

DC Log Cabin Statement on the Resignation of Kwame Brown

Leave a comment Posted by Robert Turner on June 7, 2012

Republicans: Campaigning Against Marriage is a Losing Strategy

Republicans: Campaigning Against Marriage is a Losing Strategy

(Washington, DC) – In the wake of President Obama’s personal announcement in support of the freedom to marry, Republicans should recognize the changed political climate on the issue in favor of equality.

“Marriage equality has captured the nation’s attention, and the response to President Obama’s announcement is evidence of the tide turning in favor of equality for all. Log Cabin Republicans have long believed that supporting the freedom to marry is the right thing to do and the President’s joining this effort is in the nation’s best interest. That said, Americans can be certain that the President would not have made this decision at this time if it were not in his best political interests. In addition to energizing his base and distracting attention from a failed economic record, the trap is laid for any Republican who responds with intolerance,” said R. Clarke Cooper, Log Cabin Republicans Executive Director. “Already some in the GOP are taking the bait with former RNC Chairman Ed Gillespie bringing up the twice-failed Federal Marriage Amendment and the unfortunate vote on Representative Heulskamp’s (R-KS) amendment re-affirming DOMA last night. Democrats are eager to fundraise off of this issue. It is in the best interests of Republican candidates to be measured and disciplined in response, recognizing that a generational shift has occurred.”

“Governor Mitt Romney’s statement in opposition to not just marriage but civil unions jeopardizes his ability to win moderates, women and younger voters, especially as a large majority of Americans favor some form of relationship recognition for their LGBT friends and neighbors. Ultimately, the response of the Republican candidates this election cycle will determine not just endorsements by Log Cabin Republicans, but the votes of millions of Americans who are simply tired of the culture wars.”